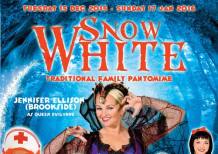 Last week the year 7&8’s went to the theatre royal to see Snow White. It seemed a bit strange going to see a pantomime after Christmas, but they usually adapt the jokes etc. after Christmas.

We all arrived and took our seats at the top of the theatre, we could see really well and waited with anticipation for the show to start.

It opened with a snowy scene set in the land of Norwichovia and we are introduced to Snow White and her family. However  Queen Evilynne plots to kill Snow White and reclaim her “fairest of them all” reputation. Snow White is then taken into the woods by the huntsman.

The acting was very good my favourite characters were  Muddles (Ben Langley who we saw at Cromer pier in the summer) . Richard Gauntlett who was brilliant as Nurse Dorothy Dumpling (he is also the writer and director) There were lots of funny jokes about Yarmouth and Ipswich etc.. Unusually the dwarfs were puppets it was a little disappointing that they were not the Disney characters we were used to but as this wasn’t a Disney production they were called The Major, Hippy, Windy, Toffee, Hercules, Ramsie and Boris.

As expected there was lots of singing and dancing and lots of opportunities for the audience to join in singing and shouting ‘he’s behind you’ etc.

However half way through the first act the theatre alarms began to go off and the theatre had to be evacuated. We waited outside for about 15 minutes and were then allowed back in. The actors handled things very professionally and carried on where they had left of.

The end of the pantomime saw Snow White marry her prince and they all lived happily ever after!

Panto’s are good family fun for all ages and there is something for everyone but they are very christmasy and are probably best seen before Christmas rather than a cold January evening.