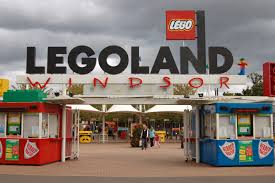 On the first day of the school holidays we took a trip to Legoland. It was a lovely sunny day so we were expecting it to be really busy. When we arrived we met our friends in the car park who were very excited and we headed to the entrance so that they could collect their tickets. The queues for the entrance were really long and I started to worry that we would be spending most of the day in long queues.

It was really sunny so we decided to start on the water rides to cool off we headed toward the log flume it looked as if there was no queue,  however we discovered that the ride had broken down so we went in search of the other water rides.

The rapids only had a short queue so we put on our ponchos and we rode the rapids. All six of us rode together crashing and bumping down the river, the cold icy water splashed over our faces and we screamed as went quickly down the rapids.

Luckily when we went back to the log flume it was all fixed, although the queue was a long  it was well worth the time! The ride starts with a twisting turning part where pirate rats, cannons and crocodiles spray you with water. After a bumpy ride the log flume takes you up a very steep hill and suddenly plummets down to the bottom drenching you !

Next we went to the knights castle to ride the dragon roller coaster. After queuing for a while we found that the line was not moving anymore,it took for what seemed ages for us to move again but instead of getting on the ride the staff  told us that the ride that broken down so gave us fast passes to cut the ques for another ride because we had queued so long and were not able to ride.

Feeling a bit disappointed we went on the nearest ride which was a fast spinning ride which made us feel very dizzy.We manage to get on lots of rides in the afternoon and we didn’t have to queue long so we didn’t need to use our fast passes.

We had lots of time so we were able to have a good look at all the models there were famous buildings from all over the world we felt like giants! There was even a huge Taylor Swift portrait made out of Lego!

Legoland is aimed more for younger children but there is still a lot to enjoy. You never get used to seeing such amazing things made of Lego!